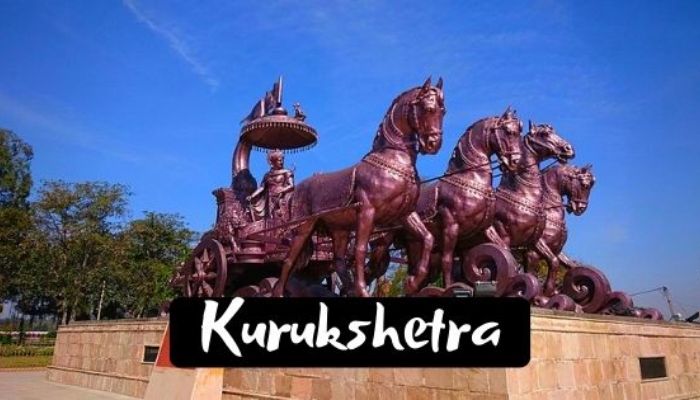 Places to visit in Kurukshetra

Kurukshetra is one of the best historical places in India & It is located in Haryana around 345km away from the ISBT (Kashmiri Gate). This place is famous for the Mahabharat war. During this war, Pandavas killed millions of Kauravas unity soldiers. Kurukshetra named after King Kuru. This is the Birthplace of Geeta & every year celibate “Geeta Jayanti” in the Month of December with a lot of joy and Happiness.

Kurukshetra is a beautiful place that offers multiple options for tourists. Find out all places in Kurukshetra

Brahma stands for Lord Brahma, the creator of the universe in Hinduism, and Sarovar in Hindi means ‘pond’. The pond is named such because myths say that Lord Brahma created the universe from the land of Kurukshetra.

The Brahma Sarovar is worshipped twice a day, at sunrise and sunset. There is also a beautiful temple that stands inside the water, accessible by a concrete bridge. A giant black stone chariot of Lord Krishna and Arjuna is located on its premises.

This pond is the most beautiful and breathtaking site in Kurukshetra city. Visitors love to spend time here watching the sunset with its reddish-golden reflection in the water. Brahma Sarovar is one of Asia’s largest man-made pond. It is 3600 ft long, 1500 ft broad and 45 ft deep.

Kurukshetra Panorama and Science Centre is a unique Centre that combines science with religion. The main attraction of the Centre is a life-like panorama of the epic battle of Kurukshetra that showcases the Mahabharata war with scientific explanations justifying every episode in the war.

A Heritage in Science, Technology, and Culture, consisting of working and interactive exhibits on the ancient Indian concept of properties of matter, the structure of the atom, geometry, arithmetical rules, astronomy, medicine, and surgery.

The tall and cylindrical building has elegant architecture and ambiance. On the center of the cylindrical hall, there are paintings 34-feet in height depicting various episodes of Mahabharata from the confrontation between the Pandavas and the Kauravas to the diorama of the battleground that epitomizes the carnage realistically.

The museum unravels the mystique of the cult of Lord Krishna. It endeavors to present the multifaceted personality of Krishna as narrated in the episodes of Mahabharata and the Bhagavata Purana. The museum has six galleries, three each in two blocks. On display are stone sculptures, bronze castings, leaf etchings, miniature paintings, clay pottery, and terracotta artifacts.

An extension of this museum is the Multimedia Mahabharata and Gita Gallery set up by Haryana Tourism in collaboration with the Ministry of Tourism, Government of India.

This is a beautiful tomb and the Madarasa (school) are associated with the Sufi saint Abdu’r-Rahim alias Aabd-ul-Razak, popularly known as Shaikh Chehli believed to be the spiritual teacher of the Mughal Prince Dara Shikoh, the eldest son of Emperor Shahjahan.

Sheikh Chehli, in the meantime, became an important character in children’s stories in his avatar as the absent-minded Sheikh Chilli.

This place is known as the Birthplace of Bhagwad Geeta. It is an important place of religious tourism & the holy land of Joytisar is believed to be the cradle of Hindu civilizations & culture. Here Lord Krishna delivered the message of Bhagwad Gita to Arjuna before the Mahabharata battle.

This place believes that Lord Krishna delivered Bhagwad Gita standing under a banyan (Baragad) tree at this place. A central place of interest at Jyotisar is a marble statue of Krishna, delivering the immortal Gita to Arjuna canopied by a banyan ( Baragad ) tree.

Dharohar is the museum representing the culture of Haryana. It is located at Kurukshetra University. Here you can explore the archaeological culture and architectural heritage of Haryana.

Q. How To Reach Kurukshetra?

A. December is the best time because of the Brahma Sarovar is hosts Geeta Jayanti celebration every year in the month of December, which is usually a seven days festival, to celebrate the birth of Bhagavad Geeta.

Q. How many days are required in Kurukshetra?

A. You can explore Kurukshetra in one day easily. But during Geeta Jayanti time 2-3 days is required to visit all the places & just hire a cab & taxi they charged around 1000-1500 per day.

Q. What Can Do at Kurukshetra?

A. You can visit temples and take a holy bath at Brahma Sarovar.

Q. What can do at the Geeta Jayanti festival?

Q. When Geeta Jayanti festival is hosted by Kurukshetra?

A. In the month of December every year, the Geeta Jayanti festival is hosted.

Roshan Panjiyara is a Travel blogger & adviser. The aim of this website provides information about Travel planning, how you can choose the best travel destination, hotels, transfers & flights in budget price for your memorable trips.

Best Tourist Places to visit in Poovar for awesome memories

11 Best Things To Do in Bikaner for Unforgettable Journey

Best Tourist Places To Visit in Rishikesh in 2020 Vacation